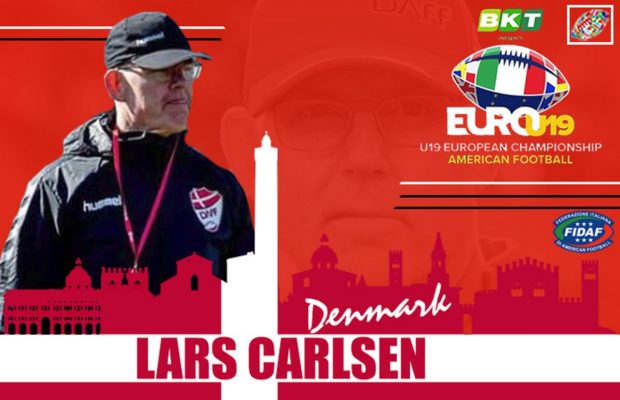 He is far and away the most experienced national team head coach in Europe, maybe even the world. Carlsen is also in charge of the Danish men’s national team.

This tournament is extra special for Carlsen. In late 2018, he was diagnosed with cancer in is throat and underwent surgery to remove the tumor. It forced him to miss the 2018 U19 Nordic Championships. And that’s basically all. He has returned at full strength and is a welcome sight on Team Denmark’s sideline.

American Football International: You are by far the veteran head coach of this tournament entering your ninth European championship. In fact, your first back in 1994 fell on almost the same dates. Tell us briefly some of your highlights in the past.

Carlsen: First, it is amazing that it is 25 years ago I first coached a Danish National Team at a U19EC tournament, and it was actually the first time ever Denmark put together a national team – and most amazing is that I’m still doing this, 25 years later – time flies when you are having fun.

To mention a few, then I will like to start back in 1994 when we met Finland and lost badly, something like 70 – 0 – the only highlight in that game was that we stopped their middle screen, that they have had great success with against the other opponents. After that game we lost several times to Finland in both Under 19 Nordic Championships and Under 19 European Championships – but in 2008 I Seville it all changed. We faced Finland in the last game in the group play and needed to win by at least 35 points to secure a spot in the bronze game, and at this time we still haven’t beaten Finland yet at any point, so the challenge was quite big. We made a daring and aggressive plan and got all coaches and players to by into it – and then we just executed – winning 46-6. Beating Finland for the first time ever.

Another highlight is from 2015 in Dresden where we lost big to Austria in the semi final and faced France in the bronze game – France was one the few teams left we still haven’t beaten yet. It was a big task to motivate players and coaches after the big loss and make them believe in the game plan and make them believe that they could win – but we did. Beating France for the first time and getting in the medals for the first time.

AFI: How much has the game developed over those years?

Carlsen: The game has developed a lot – the players are better athletes and they are better coached. The game itself is faster and more dynamic; all teams are better coached and are playing more into their strength of players than forcing their players into a system they don’t fit into 100%. Teams are much better prepared for each opponent and you can not take any opponent lightly, because all team are well coached and if you are having a off-day and day are having a perfect day, any team can loss to any team.

AFI: You won a bronze medal four years ago. How would you rate your team this year?

Carlsen: It is always tough to compare teams from different times, also in this case – but should I give it a try, then I would say that this year’s team is less talented in some areas but is absolutely more talented and experienced in other areas. If we can avoid any major injuries and if we as coaches are able to make sure that we game plan into our strengths, then I would say that this team is as good as the team from 2017.

AFI: You are seeded #3 and will face Italy in the first round. They will have amazing support. How do you keep your players calm and focused?

Carlsen: From having played Italy at home a couple of times in the past, I know that they will be very motivated and that there will be many very supportive and patriotic fans in the stands – and since we have known that we would play Italy in the first game for some time, we have used our camps to prepare the players for this game making sure that they not only are ready for all that will be going on before and during the game, but are looking forward to it.

AFI: Temperatures will be in the mid to high 30s (Celsius). How much of a factor will that be?

Carlsen: I approach the heat somewhat the same way as I approach the Italian fans; working on getting into being in our favor – making the players want the temperature to be high.

That being said, we are happy that we play our first game at 21:00 where the temperature has dropped just a little bit, but it is till going to be hot. Unfortunately, the weather in our last camp in Denmark was plain old regular Danish summer – not very hot. But we head down to Bologna already on Friday July 26th to do our last preparations there in the temperatures we are going to play in. Taking all into consideration I hope that the temperatures will have little effect or even a positive effect on our performance.

Carlsen: I will like to say that I’m looking forward to this like it was my very first time. Last year in October I doubted a couple of times that I was ever going to do this again or even coach again. I have received so much support from everyone from all over the world – in particular from all staff and players on the national team and it is with renewed joy and motivation I coach now, and I’m so grateful.