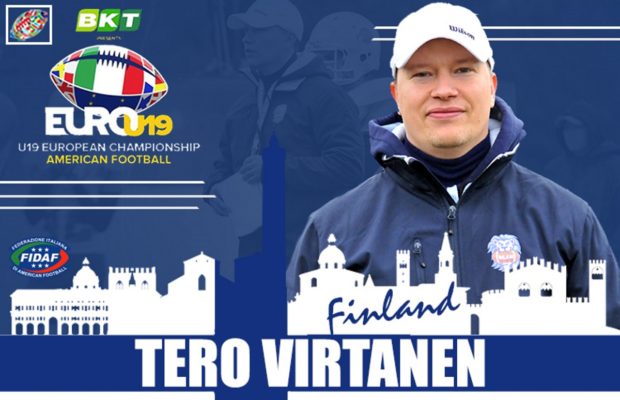 Team Finland head coach Tero Virtanen has been coaching with Finland’s U19 national team since 2015 and is entering his third European championship as he prepares his team for the  IFAF 2019 U19 European Championships being held in Bologna, Italy from July 29 to August 4.

American Football International: Tell us briefly about your background in coaching in Finland.

Virtanen: If you don’t count junior flag football in the early 90s, I really got into coaching in 2004 with the Helsinki Roosters U21 team. I have been involved with U16/U17 national team since it’s launch in 2007-2008, then moved to the U19 national team in 2015. Also a few seasons here and there with club teams (Roosters, Lohja Lions & UNC). If not head coach. I have always coached defense and special teams.

AFI: You are facing your first major test of the year without a friendly first. How does that feel?

Virtanen: Considering we played the Nordic tournament in 2018 and the EJC qualifying game vs Russia in May, I think we should be fine.

AFI: How was training camp?

Virtanen: It was good. On one camp day we had an excellent simulation for Bologna with four hour practice in relatively hot weather, also we had the right guys in place and got things done.

AFI: You enter the tournament as the #5 seed. Does that have any effect on your preparations?

Virtanen: No effect. Happy to play a team outside Scandinavia. If you want to be the champion you have be ready to face whoever.

AFI: You face France in the first round. The last time Finland played France in this tournament was 2006 and France won. Can you use that as incentive?

Virtanen: The incentive for us is that “it’s been too long”. We can’t wait for the challenge.

AFI: Finland has won the U19 European title three times but not since 1996. How confident do you feel about your chances this year?

Virtanen: For myself, having played on that 1994 championship team, I feel pretty good. We have the elements needed to go all the way. We just need to be sure we take our chances when we get them.