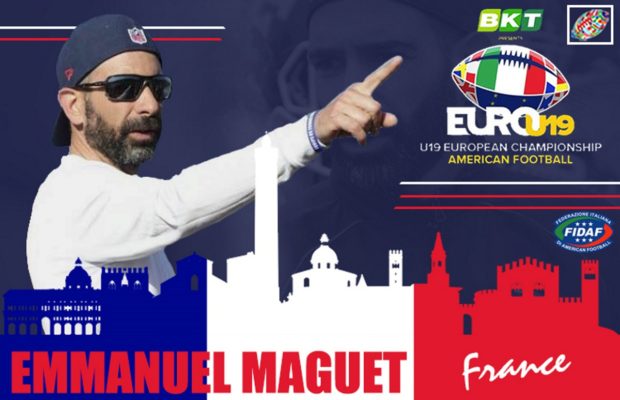 French U19 national team, Team France, head coach Emmanuel Maguet is in final stages of preparation, getting his team ready for the IFAF 2019 U19 European Championships being held in Bologna, Italy from July 29 to August 4.

Maguet is one of the veterans of football in Europe, especially at the national team level. He has been involved in coaching Team France, both the U19 and Senior Men’s teams, since 1996.

Coach Maguet has submitted his preliminary, 60 man roster for the tournament and will hold a final training camp starting July 23 in Thonon les Bains, at the practice facilities of the Thonon Black Panthers, where he and his staff will reduce the roster to the final 45 players.

American Football International: Tell us briefly about your background in coaching in France.

Maguet: I started football in 1988 with the Aix en Provence Argonautes, stayed there till 2004, when I started working for the FFFA, French Federation of American Football. I have been coaching national teams (U19 & Sr) since 1996 with the FFFA.

AFI: You are facing your first major test in two years without a friendly game first. How does that feel?

Maguet: Weird, but it is what it is . We had some games with the Academy (Pole Revolution) so we were able to test some guys.

AFI: You have one camp to go?

AFI: You enter the tournament as the #4 seed. Does that have any effect on your preparations?

AFI: You face Finland in the first round. The last time France played Finland in this tournament was 2006 and France won. Can you use that as incentive?

Maguet: Not really, it will be a tough game against a good and well coach team.

AFI: France has won the U19 European title twice and won silver once. How confident do you feel about your chances this year?

Maguet: With the U19, the team is totally new every tournament, so the past is not a sure win or lose.