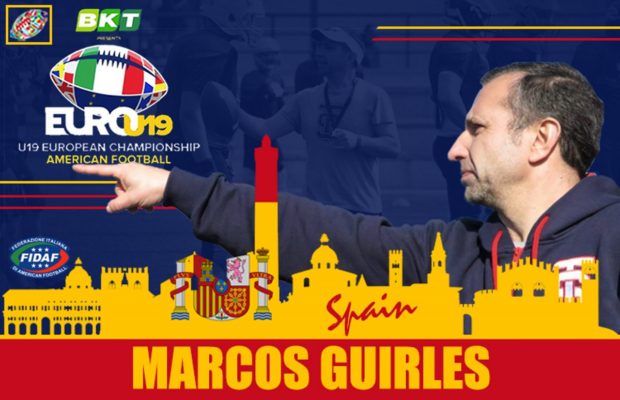 Head coach of the Spanish U19 national team, Team Spain, Marcos Guirles has held his final brief training camp before leading his squad to Bologna, Italy for the IFAF 2019 U19 European Championships, July 29 to August 4.

Team Spain has no easy task. They face the four-time champions, Team Austria in the first round, a team that has not lost a game to another European team since 2008.

The last time Spain reached the final tournament was 2011 when they were eliminated by Swedenin the opening game.

The Spanish squad had been beaten by the Netherlands in a qualifier earlier this year, but when Team Holland suddenly discovered they could not make the trip to Italy, organizers turned to  the Spanish Federation of American Football, who were able to reassemble their team on short notice.

We asked Coach Guirles about the hasty preparation, their prospects and about the heat.

American Football International: Tell us briefly about your background in coaching in Spain.

Marcos Guirles: I started coaching with the Barcelona Uroloki in 1988. I was the running back coach for the Barcelona Dragons in NFL Europe from 2000-2003. From 2004 to 2009 I was the NFL Mexico scouting coordinator. I took over as head coach of Team Spain in 2011.

AFI: You are entering the tournament after losing to the Netherlands who pulled out. How do you motivate your team? Fortunatelly you do need to motivate these young football players.

Guirles: They know this tournament is a rare opportunity to play the sport they love against the best countries in Europe.

AFI: With the short notice were you able to hold a training camp? (If so, how did it go?)

Guirles: We held a quick training camp with short numbers of players and staff. After our defeat against the Netherlands, most players and staff made their holiday plans. Some of them were able to cancel and some were not.

AFI: You enter the tournament as the #7 seed facing Austria who haven’t lost a game since 2008. How much extra incentive does that bring?

Guirles: Being able to play against a strong team like Austria makes us feel very fortunate. The better the opponent the more you learn.

AFI: How many of the players who played against the Netherlands are also on this team?

Guirles: Half of the team.

AFI: Who are your five key players?

Guirles: I would like to say that our key is our strength as a group.

AFI: Your players will no doubt not be affected by the heat. Will this help you against the northern European teams?

Guirles: Neither the heat nor the cold will affect these young athletes.

AFI: What are your expectations?

Guirles: To have a delightful experience playing good football