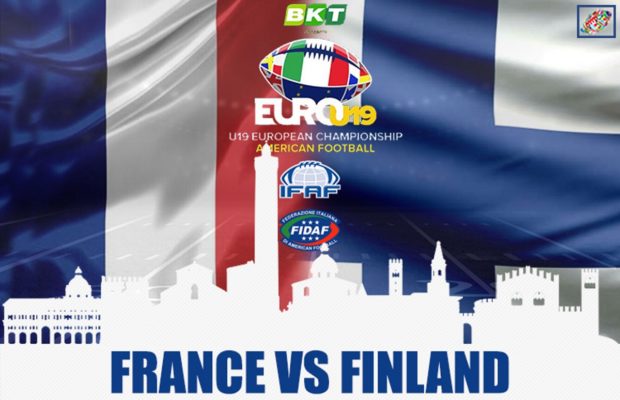 Team France opens the IFAF 2019 U19 European Championship tournament in Bologna, Italy,Monday, July 29 with the toughest draw as they face Team Finland at C.S. Bernardi Stadium.

Finnish head coach Tero Virtanen coached Finland to the silver medal in the 2018 Nordic championships. The Finnish national team won the first three U19 European Championships, 1992, 1994 and 1996, finished third in 1998 and took fourth in 2000.

Team France head coach Emmanuel Maguet uses a Wing T offense relying on quarterback Léo Cremades, who has played high school football in Florida. Running Back Cyril Laib is also a key. His club team, the French Pole Revolution, uses the same offense so he is very familiar with it.

Defensive back Maceo Beard is definitely a key player on defense. He’s experienced and knows the 4-3 system run by Coach Maguet. Defensive lineman Chris Fontenard is fast and can put pressure on opposing offensive lines. Strong safety Elijah Cramaix is also a player to watch in this defense.

For Finland, quarterback Jere Byman is highly experienced and has played in Finland’s top division, the Maple League. Center Niilo Ojansivu will be important while speedy receiver Teemu Maenpää is a threat every play from the slot position. Finland’s receiving corps is excellent and all of them have played in the Maple League.

Coach Virtanen will look to defensive end Edward Vesterinen who is a starter for the Helsinki Roosters, to anchor the defense. His linemate, Okko Mäkänen is considered one of the best defensive players in Finland. Add to that Will Lindfors who has been a starter on the Finnishnational team for four years and defensive back Iiro Pekkarinen and Finland has an impressive defense.

Both teams have excellent records in previous European championships and both have experienced coaching staffs. This one is tough to predict.