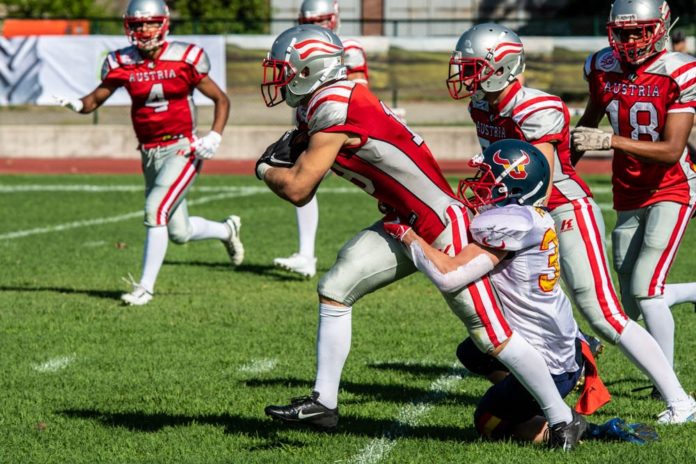 It did not take Team Austria long but once they got past the shock of a Spanish touchdown scored against them, they found another gear and roared to a 61-7 win over Team Spain in the opening round of the IFAF 2019 U19 European Championships, Monday July 29 at Arcoveggio  Stadiumin Bologna, Italy.

The Austrians are one of  the favorites to win the title they have captured three times before.

However in this game they started out tentatively. Although they took a 17-0 first quarter lead, Spain surprised them, scoring three minutes into the second quarter to close the gap to 17-7.

That was the wake up call for the Austrians.

Austria scored three more times in the first half to take a 38-7 lead. The bombardment continued in the second half. 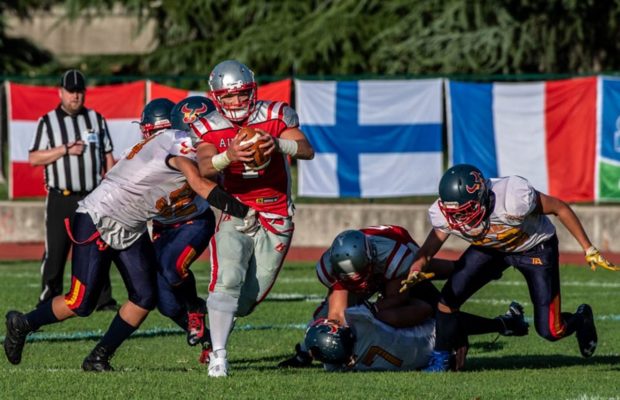 For Team Spain, it was a tough night for quarterbacks as all three – David De Diego Maffrand, Vincent Gabel Martinez and Alex Pacheco Garcia – combined for 55 yards in passing. De Diego Maffrand scored the lone Spanish touchdown. Running back Miguel Quince Lopez was a bright spot for Spain rushing for 63 yards, 52 of that on one run, which led to the touchdown.

Compare this to Austria’s 502.

Austria scored two touchdowns in the first quarter on their first two drives but a fumble snuffed out the third possession. Wenzel Rock kicked a field goal for the Austrians to close out the period. Spain could not advance past their own 25 yard line until Quince Lopez found a seam and took off, racing 52  yards down to Austria’s seven yard line. Two plays later, De Diego Maffrand punched the ball in and Spain closed the gap to 17-7.

That unleashed the Austrian offense.

Austria scored three more times in the quarter with Halswanter scoring twice and Berghammerhauling in an 80 yard touchdown pass from Gruner to boost the score to 38-7 by the half.

Spain opened the third quarter with promise gaining a first down and moving the chains, but could not get past their own 40. A short punt gave Austria the ball in decent field position, But their next drive stalled on the Spanish 26 and Rock missed a field goal attempt.

After that though, Spain could not move the ball and Austria scored on their next two series with Halswanter (who else?) and Djukic adding touchdowns making the score 52-7 early in the fourth.

A Spanish fumble on their own goal line produced the final Austrian touchdown with Davide Rettenbacher pouncing on the ball.

Austria wrapped up the scoring with a safety with three minutes to go making it 61-7. The Austrianoffense then simply wound down the clock and started looking ahead to Denmark in the next round.