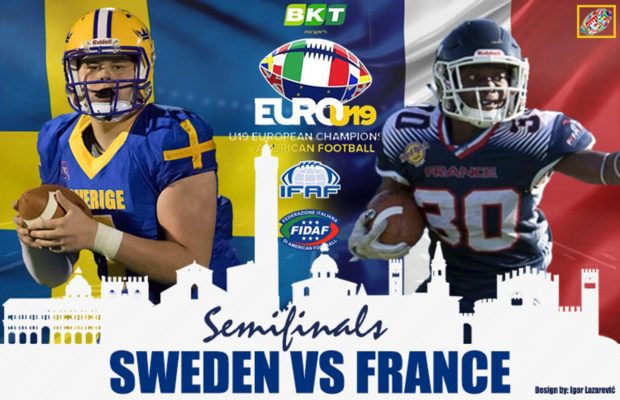 Team Sweden and Team France will square off in one of the two semifinal games on Thursday, August 1, Day 2 of the IFAF 2019 U19 European Championships at CS Bernardi Stadium in Bolgna, Italy.

Sweden defeated Norway on opening day, beating them 20-7 in a game that was closer than predicted. France wore down Finland, scoring 30 unanswered second half points, blanking the Finns 30-0.

This will be a classic matchup. The best passing offense in the tournament so far against the second best rushing offense.

Swedish quarterback Viktor Ekberg impressed and led all quarterbacks after Day 1 throwing for 245 yards against Norway. However. the French secondary could pose a challenge for Ekberg and his offensive line will face more pressure from an athletic French front seven. However, his quick release will help and along with his ability to get the ball deep. His favorite target, Victor Wikstrom,who had 123 yards receiving in the opening win, is big, 6’4″, 245 lbs, and fast and won’t be muscled off the ball. Alexander Nesic, who had 81 yards receiving and caught two touchdown passes, was a positive surprise for Sweden and can create havoc.  Sweden’s ground game has to improve though. Victor Cimrell will need to have a better day rushing to take some pressure off of Ekberg.

Defensively, Sweden held Norway to 119 yards on offense. Linebacker Edvin Jonsson led all tacklers with four while also recovering a fumble. If he can perform at the same level along with Alexander Nordgren and Sebastian Nilsson who seemed to be everywhere for Sweden, they can keep the French running backs in check.

Meanwhile, the French ground attack features four different backs who can cause problems. Keita Redval, Laib Cyril, Bakhanti-Polin Yans and El Kharti Elias are all dangerous. Redval led all French rushers with 93 yards in the win over Finland, but  Bakhanti-Polin was the workhorse with 15 carries. Quarterback Collomb Matheo was not called upon to do much other than hand off the ball but did throw a touchdown pass to Manigold Terence.  Clement Chevalier who was named Game MVP for France against Finland, after snagging a big interception, was active all game long and Ekberg will have to keep an eye out. Defensive tackle Fontenard Christopher anchors a big and athletic defensive front seven. He scored a touchdown against Finland after deflecting a pass into his own hands.

This could well be the game to watch on the second day of the tournament.