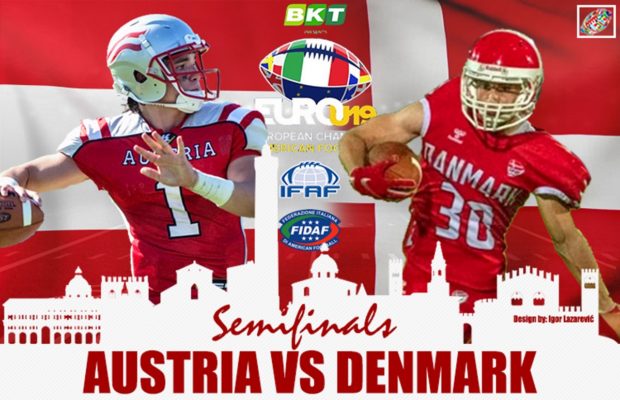 Team Austria will face a stiffer challenge on Day 2 of the IFAF 2019 U19 European Championships when they take on Team Denmark, Thursday, August 1 at Arcoveggio Stadium in Bologna, Italy.

The Austrians had no trouble disposing of Spain on Day 1, rolling over them 61-7 while the Daneshad a tougher time, finally coming from behind to defeat the host team, Italy 17-6.

The last two times these two teams have faced each other in this tournament Austria came out on top. At the 2015 European Championships, Team Austria defeated Denmark 41-6 while four years earlier, in 2011, the score was much closer, 21-16.

The Danes will be challenged in this game as Austria features the most balanced offense in the tournament. With Yannik Gruner at quarterback and running backs like Lukas Halswanter andJohannes Schutz, and a receiving corps led by Mathias Berghammer, Denmark will be under pressure. Center Markus Florian anchors arguably the best offensive line in the tournament.

Although Danish running back, David Mac Espersen, who leads the tournament in rushing yardage after Day 1, proved himself against Italy, he will be facing maybe the best front seven in the tournament. The Austrian defensive line and linebackers are fast and physical.

The Austrian linebackers led by  Paul Lemberger, Davide Rettenbacher and Gabriel Weiss are very active and quick. Add Lucky Ogbevoen who made the trip after playing in the Austrian Bowland scoring a touchdown for the Dacia Vienna Vikings, and they have a formidable group. Lemberger topped the team with 3.5 tackles. Defensive back Cserveny Benjamin leads one of the best secondaries in the tournament.

If Denmark can calm down their quarterbacks and the players can believe, they could have a chance.

Defensively, linebackers David Tawake and William Kidmose (who led the team in tackles by a wide margin with 7) anchor an excellent front seven but will really be put under pressure. The defensive line need to keep them free from blocks or the Austrian running backs will take advantage of it.