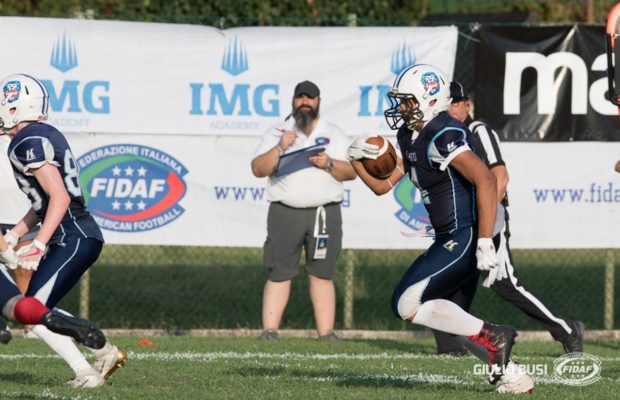 Team Finland unleashed their frustration for their loss to Team France on opening day, dominatingTeam Norway from start to finish, finally winning 29-0.

The score could have been much worse. Finland reached the red zone three times without scoring.

The Norwegian quarterbacks were under relentless pressure throughout the game from a Finnishfront seven led by Edward Vesterinen who had numerous sacks and countless hurries.

The Finnish offense was powered by their running backs on this night, especially Nico Barrowwho showed why he is starting for the Wasa Royals in the Maple League. Barrow had 95 yards rushing and two touchdowns on 15 carries. His backfield teammate, Deniz Unal carried the ball 10 times for 80 yards. Finland racked up 373 yards of offense on a Norwegian team that was simply outmuscled for much of the game.

Finnish starting quarterback Jesper Korkalainen completed 11 of 19 passes for 155 yards while Ambro Urjansson threw for 56 yards and a touchdown on three of five passing. Barrow was also the leading receiver for Finland with 6 catches for 54 yards. Kristian Natunen caught the lone  scoring pass.

Norway had six first downs the entire game. That pretty much says it all.

The Finns set the tone from the opening whistle, forcing Norway to concede a safety on the very first possession, trapping Myhrer in the end zone, making the score 2-0.

On their very first possession following an excellent 41 yard return to the Norwegian 34 by Arttu Parjarinen, the Finns drove to Norway’s 15 and kicked a field goal, upping the score to 5-0.

Norway could not get past their own 20 yard line the entire first half and kept giving Finland short fields.Team Finland started drives deep inside Norwegian territory on every series except two. They kept shooting themselves in the foot with penalties and mistakes or the score would have been far worse.

Norway’s defense also rose up on almost every occasion and kept the Norwegians in the game.

Finland finally managed another field goal midway through the second quarter to raise the score to 8-0.

The second half started the same way as the first ended with the Norwegian offense stalled on their own 16 and then giving up a punt return which Finland gladly returned to the Norwegian 28, Two plays later, Barrow took the ball in from the 14 upping the score to 15-0.

Norway began to look like a tired team at this point.

Bakkeli replaced Myhrer but to no avail.

The Norwegian defense valiantly tried to keep the team in the game, stalling the Finns at critical junctures.

Finland took a 15-0 lead into the fourth quarter and finally started to march. Korkalainen drove them 44 yards in six plays with Barrow scoring his second touchdown of the game from 15 yards out, increasing the lead to 22-0.

Norway managed to drive to their own 47 yard line, the closest they would come to Finnishterritory. The Finns took the ball over at their own 40 and three plays later, which included a 32 yard completion to Natunen, Urjansson hit Natunen again for an 18 yard touchdown to give Finland a 29-0 lead.

The game was marred by penalties as the referees called 12 on Norway for 114 yards and 14 on Finland for 113 yards. The final five minutes of the game was filled with incomplete passes and penalties as both teams seemed ready to end the game.

With the win, Finland will face the winner of the game between Spain and Italy.

“We simply have been outmuscled, on both sides of the ball.”