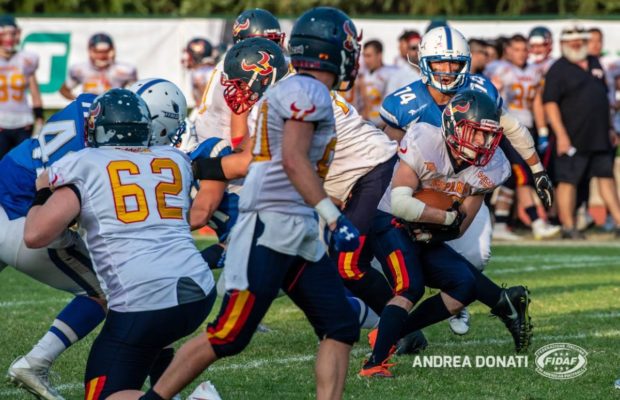 Team Spain rebounded from a devastating loss to Austria three nights before to surprise the tournament hosts, Team Italy, beating them convincingly 36-21 in the consolation round of the IFAF 2019 U19 European Championships at at Arcoveggio Stadium in Bologna, Italy.

Spanish head coach Marcos Guirles did an incredible job of turning around his undermanned squad and it showed from the opening whistle.

Spain took charge on the opening possession and even though the first drive only resulted in a field goal, the Spaniards served notice that they were intent to winning this game.

For Italy, Davide Rossi had a subpar day throwing for 176 yards and two touchdowns but he was picked off twice. Adalberto Rinaldi was his top receiver with four receptions for 101 yards and both of the touchdowns. Andrea Constanzi had two receptions for 22 yards and a touchdown. The Italian ground game was non-existent on this day producing -9 yards rushing.

De Diego led his team on an eight play, 56 yard drive to open the game, capping it with a 35 yard field goal from Cuenca. It wasn’t the field goal but the fact that Spain moved the ball so well that surprised observers. 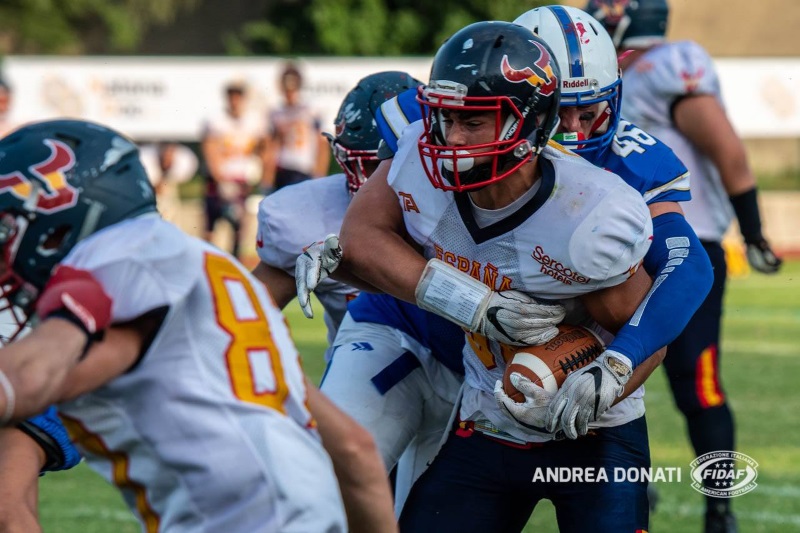 Italy finally responded early in the second quarter as Rossi, taking over in good field position on Spain’s 41 after a failed fourth down attempt, moved the Italians down to the nine and then hit Costanzi for a touchdown.

The Spanish team answered with De Diego connecting with Fernandez for a 28 yard touchdown pass, moving back out in front 10-7.

Italy’s offense came to life with Rossi marching them down to the Spanish 27 yard line in three plays and then finding Rinaldi  to restore the lead, 14-10.

With just under three minutes left in the first half, De Diego engineered a seven play, 83 yard drive, and Quince finished it off with a one yard plunge to give Spain a 17-10 leading heading into halftime.

Team Italy came out swinging in the third quarter as Rossi moved his team smartly down the field, reaching the Spanish 26 yard line. But he was intercepted on the goal line. Spain could not move the ball and after taking over at the Spanish 28 following an excellent punt return, Rossi could not move his team past the Spanish 15.

De Diego went back to work late in the fourth moving his team down to Italy’s one yard line and handing off to Cuenca to increase the lead to 23-14 early in the fourth.

Midway through the final quarter, Hugo Munguez picked off a Rossi pass on Italy’s 31 yard line and raced into the end zone to up the Spanish lead to 29-14.

That spelled the end of the game for Rossi as R.P. Ines came in and immediately  sparked the offense, moving them 57 yards in just over a minute and hitting Rinaldi for a 32 yard touchdown, narrowing the gap to 29-21 with three and a half minutes left.

The onside kick attempt backfired and Spain took over at midfield. Three plays later, Martin,replacing De Diego at quarterback, scored from seven yards out to give Spain a 36-21 lead with two minutes  to go.

The Spanish defense then held off Italy and time finally ran out giving Spain a major victory.

Spain will now face Team Finland in a battle for fourth place on Sunday, August 4.