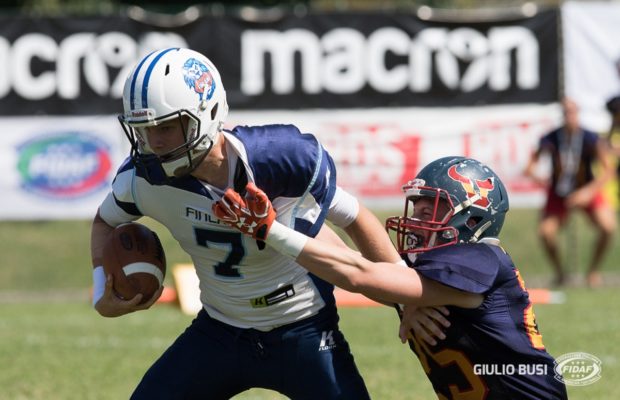 Team Finland trailed for virtually the entire game against a feisty Spanish squad but scored two late touchdowns to defeat Spain 13-9 to finish fifth in the IFAF 2019 U19 European Championships at CS Bernardi Stadium in Bologna, Italy.

Spain looked like they would earn their best ever finish in the tournament after forcing a safety and scoring a touchdown midway through the first quarter. The Spanish defense played extremely well throughout the game keeping the Finns from mounting a consistent offense.

Until the fourth quarter.

Finnish running back Deniz Unal scored from 10 yards out with four minutes left in the game and then the Finnish special teams recovered the onside kick. Spain got the ball back in their own zone though with just over two minutes to go on a pick by Alex Pacheco. But right at the two minute mark Finnish defensive lineman Edward Versterinen blocked a Spanish punt recovering the ball himself and carrying it down to the eight yard line. Finnish quarterback Jesper Korkalainen hit Paananen from the four yard line and Finland went ahead 13-9. Finland picked off Spain’s David De Diego to finish the game.

The Finnish quarterbacks – Jesper Korkalainen and Ambro Urjansson combined for 174 yards passing with and one touchdown. Running back Nico Barrow had a quiet game with 12 carries for 32 yards while Unal had 31 yards rushing and the touchdown. Jaakko Paananen caught the touchdown pass.

Spain stunned the Finns by forcing a safety on their second possession after lofting a punt down to their five yard line. Leading 2-0 with less than five minutes left in the first quarter, Carlos Marin heaved a beautiful throw hitting Castagno in stride and he took it all the way 76 yards for a touchdown and suddenly Spain held a 9-0 lead.

Plenty of time left for Finland you would think.

Spain then played the best football they have played in this tournament.

Through to midway through the fourth quarter, Finland could not penetrate past Spain’s 35 yard line.

That changed with four minutes left. Korkalainen engineered a 63 yard drive with Unal scoring. Things went Finland’s way after that with Paanaen scoring the winning touchdown.

With the win, Finland finished fifth in the tournament and Spain sixth, the highest placing ever for a Spanish U19 team in the European championships.