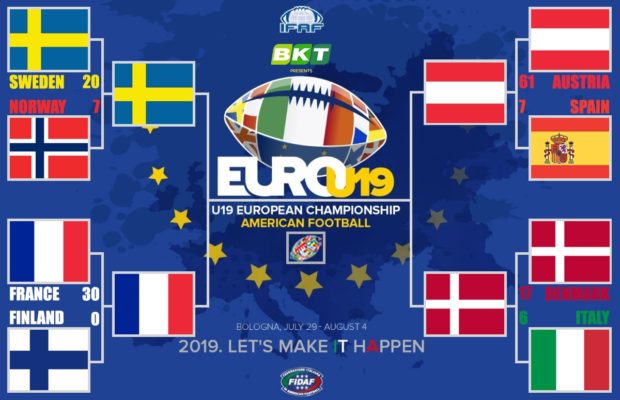 The IFAF 2019 U19 European Championships head into the semifinal stage on Day 2 of the tournament with the top four teams – Austria, Sweden, France and Denmark – squared off.

This will be a classic matchup. The best passing offense in the tournament so far against the second best rushing offense. The French secondary will be a challenge for Swedish quarterback Viktor Ekberg and his offensive line will face more pressure from an athletic French front seven. However, Ekberg’s quick release will help and along with his ability to get the ball deep. Meanwhile, the French ground attack features four different backs who can cause problems. Keita Redval, Laib Cyril, Bakhanti-Polin Yans and El Kharti Elias are all dangerous. Swedish WR Victor Wikstrom led all receivers due in part to his size and smarts. He will be facing a fast Frenchsecondary though who will make him work.

This could be the best game of this round

The Danes will be challenged in this game as Austria features the most balanced offense in the tournament. With Yannik Gruner at quarterback and running backs like Lukas Halswanter and Johannes Schutz, and a receiving corps led by Mathias Berghammer, Denmark will be under pressure. Although David Mac Espersen proved he is a big time running back against Italy, he will be facing maybe the best front seven in the tournament. The Austrian defensive line and linebackers are fast and physical. If Denmark can calm down their quarterbacks and the players can believe, they could have a chance.

The Italians fed off the incredible fan support they had against Denmark and surprised the veteran team by taking an early lead. Quarterback Davide Rossi was composed but his younger receivers were affected by the pressure and dropped balls. However Adalberto Rinaldi andAlessandro Brovelli impressed and Rossi will likely look more for them in this game.  Against Spain, the first game jitters should have disappeared and expect the Italian offense to perform better.

This could be an upset in the making. Norway stepped up their game against Sweden and quarterback Raymond Myhrer proved he is a bona fide starter after converting from receiver. His chemistry with Erlend Lien was uncanny. The pair could cause problems. The Norwegian front seven led by Kacper Latkowski put some pressure on Ekberg. They can cause a problem for the Finns. Finland’s quarterbacks struggled against France leaving the defense on the field too long against the relentless French run-first offense. If the Finnish passing game settles down opening up for the run, the offense could give Norway a problem. Finland’s defense neutralized the Frenchwing t in the first half but were on the field far too long and it took its toll in the second half.