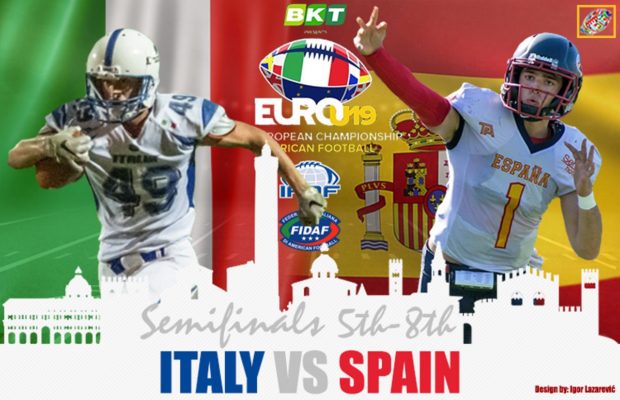 The host team, Team Italy, will face Spain in the consolation round as the IFAF 2019 U19 European Championships continue Thursday, August 1 at Arcoveggio Stadium in Bologna, Italy.

Italy lost their opening game of the tournament to Team Denmark 17-6 while Spain was pummeled 61-7 by Team Austria.

The Italians fed off the incredible fan support they had against Denmark and surprised the veteran team by taking an early lead. Quarterback Davide Rossi was composed but his younger receivers were affected by the pressure and dropped balls. However Adalberto Rinaldi and Alessandro Brovelli impressed and Rossi will likely look more for them in this game.  Against Spain, the first game jitters should have disappeared and expect the Italian offense to perform better.

On defense for Italy, defensive end Andrea Poglietelli anchors a strong front seven which includes linebacker Tiberio Calbucci, who performed as expected and led the team in tackles with 6.5. He can make a difference. Cornerback Eugenio Mannato leads a secondary which held Denmark to 74 yards passing.

Spain,  undermanned with a short roster, were in tough against an Austrian squad that is expected by many to reach the final. It was a tough night for all three Spanish quarterbacks – David De Diego Maffrand, Vincent Gabel Martinez and Alex Pacheco Garcia – who combined for 55 yards in passing. De Diego Maffrand scored the lone Spanish touchdown. Running back Miguel Quince Lopez was a bright spot for Spain rushing for 63 yards, 52 of that on one run, which led to the touchdown. However, Spain managed just 113 yards in offense in total.

Against Italy, expect the Spanish defense to perform better. The first game is past and they know they are facing a team closer to their level. Pelayo Barredo led the team in tackles with 5 while defensive end Alejandro Fernández, one of Spain’s best defenders had 2.5.  Coach Guirles will be looking for players like Paul Morilla who plays with a high motor and defensive back Lucas Masero to have better games.

This game is tough to predict. Italy will have huge fan support but that can also backfire if the players feel the pressure. Spain can now play without pressure. They were a last minute substitution and now the worst game is past them.