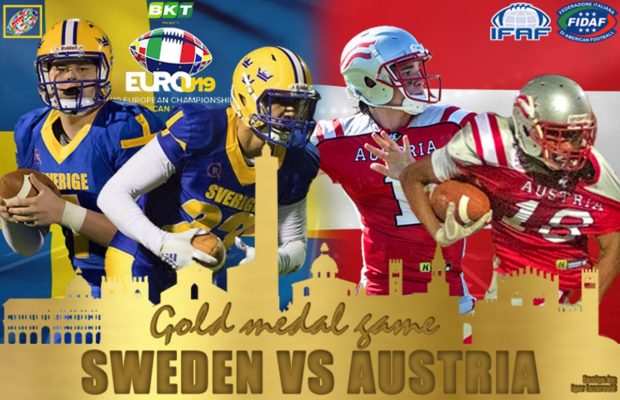 Team Austria and Team Sweden will square off in the gold medal final in the IFAF 2019 u19 European Championships at Arcoveggio Stadium in Bologna, Italy, Sunday, August 4.

Team Austria has had no trouble in arriving in the gold medal game with easy wins over Spain, 61-7, and Denmark, 45-6. Sweden had a tougher road with a 20-7 victory over Norway and then a physical battle with France which ended in a 7-0 win for the Swedes.

Sweden’s spread offense sputtered for much of the game against France, coming alive early in the second half with quarterback Viktor Ekberg taking charge, marching his team downfield mixing up his plays and finishing it off by barging into the end zone himself. However, the French defense made life difficult for Ekberg who only threw for 73 yards. His key receivers, Victor Wikstrom and Alexander Nesic, are his go-to guys and they struggled to get open. They will need to find a way to create space quicker to have a chance against the Austrian secondary. Running back Victor Cimrell is definitely a workhorse but he will really need his offensive line to create some gaps. That will be the only way to take pressure off of Ekberg.

Sweden’s defense is led by DE Sebastian Nilsson who anchors a crew which includes Alexander Nordgren, and which is physical and around the ball constantly. The secondary has not been severely tested yet though. Against an Austrian team with multiple weapons and the most well balanced offense in the tournament they will have to be sharp.

Austrian quarterback Yannik Gruner has an abundance of receivers and running backs at his disposal. Running backs like Lukas Halswanter and Johannes Schutz, and a receiving corps led by tournament receiving leader Noah Toure and teammate Mathias Berghammer will definitely test the Swedish defense. The Austrian defense has looked as good as the offense. With linebacker Davide Rettenbacher who leads the team in tackles and defensive lineman Richard Gao who was outstanding in the win over Denmark, Austria has an imposing defensive front seven. The secondary has not really been put to the test as both the Spanish and Danishquarterbacks have not had much time to throw. Nevertheless, defensive back Cserveny Benjaminleads a strong secondary.

Austria is the favorite going into this game, but Sweden’s offense can be explosive.