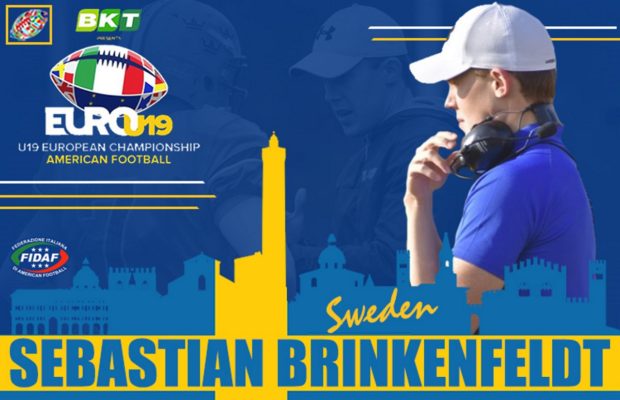 Team Sweden head coach Sebastian Brinkenfeldt is taking on his first major challenge since taking over the Swedish U19 national team in the offseason as the team prepares for the  IFAF 2019 U19 European Championships being held in Bologna, Italy from July 29 to August 4.

And it’s quite a challenge. His team will be facing the top seven other countries in Europe and he has not coached a down yet.

Brinkenfeldt has taken over a team which won the 2018 Nordic U19 Championships, beating Finland in the gold medal final. Team Sweden also went to the bronze medal game in the 2018 IFAF U19 World Championships but were beaten by Team USA.

And yet, despite his age, he is only 28 years old, Brinkenfeldt from Stockholm, is not fazed as he explained to American Football International.

AFI: You are facing your first major test as new head coach of Sweden’s national team without a friendly first. How does that feel?

Brinkenfeldt: A daunting task some might say, and I wouldn’t say that they are wrong. But, that being said, most of the players and coaches I have worked with previously, so it’s not so much being new on the job as it is a continuation. I feel very good about the players and coaches that we are bringing to Bologna. We have some fantastic athletes, coupled with smart and dedicated coaches.

AFI: Tell us briefly about your background in coaching in Sweden.

Brinkenfeldt: I started as a PeeWee-coach in Täby Flyers in 2007 and has since then been across the youth and junior ranks. Since the start I have remained with the Flyers and am currently serving as the U17 and U19 head coach. My national team coaching experience started in 2014, when I was asked by Leo Billgren, then head coach of the Swedish Student National Team, to serve as the assistant head coach during the Student World Championship in Uppsala. That was a great learning experience for me. In the fall of 2014, I was asked by Björn Marcusson, then head coach of the youth development team, to take his place the following year. So from 2015 to 2018 I was the head coach for the youth development team and now starting 2019, the head coach for the junior national team.

AFI: When will you have your final training camp?

Brinkenfeldt: We start of in Sweden on July 25th and then we travel to Bologna on July 28th.

AFI: You enter the tournament as the #1 seed. How much extra pressure does that bring?

Brinkenfeldt: Number 1 seed in the rankings maybe, but during tournaments like this, every team wants to win as badly as the next one. We consider every game in the tournament just like it would be the gold medal game, which we definitely plan to play in. We are humble enough to recognize the opponents that we may face during the tournament and their track record. Number 1 seed ranking wise, but also a potential underdog.

AFI: You face Norway in the first round, a team Sweden defeated easily in the Nordic championships last year. Norway surprised by beating Great Britain to get here. How will you keep your players from being too confident?

Brinkenfeldt: First of all, we need to recognize the accomplishment by the Norwegian team. I have faced Head Coach Benestad-Johansen previously (U17 Nordic Championship 2017) and the direction the Norwegian program has taken since then is very impressive. Just looking back to the U19 Nordic Championship 2018 and to the qualifier against Great Britain this year, they have once again taken a huge step in quality and execution. They have a dedicated group of players and coaches, willing to work hard to become better, and its showing!Also I thinks it’s a matter of leadership, from coaches and senior players. We need to expect and require a high standard for everybody involved, accountability is key, and that spreads across everything from practices to game planning and preparations. The “Swedish Standard” is what we expect from ourselves, regardless of opponent.

AFI: You have coached younger national teams in Sweden. How much of a step up is this?

Brinkenfeldt: In some parts, it’s a huge step, e.g. now you are competing for a gold medal in the European Championship and you need to find a way to win each game. At the same time, many of the core components of being a head coach are the same. It’s about leadership and building a program, together with the assistant coaches and players, and then let them do their work. I am probably a lot less hands-on football-wise than many other head coaches, but then again if I find great coaches, why interfere…