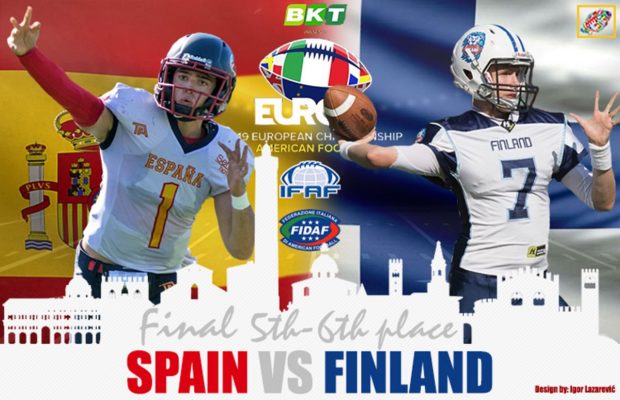 A surprising Team Spain will face Finland in a battle for fifth place as the IFAF 2019 U19 European Championships tournament enters its final day in Bologna, Italy.

Team Spain opened the tournament with a lopsided 61-7 loss to Austria but rebounded against Italy, beating them 36-21. Finland reached this game after losing 30-0 to France in their opening matchup but then shutting out Norway 29-0 in their second game.

Spanish quarterback David De Diego threw for 232 yards against Italy with Matias Castagno catching four passes for 109 yards. Running back Miguel Quince had an outstanding day rushing for 80 yards to take over the rushing lead for the tournament. If these two can match or even come close to that performance in this game, they have a chance to finish higher than they ever have in the European championships. Needless to say, the Finnish secondary will have their eyes on Castagno.

On defense, Spain will need to find a way to control the Finnish running backs who ran amok against Norway.

Finnish running back Nico Barrow was superb against Norway scoring two touchdowns while rushing for 95 yards. His backfield teammate Deniz Unal, while young, played with poise and rushed for 80 yards against the Norwegians. Finnish starting quarterback Jesper Korkalainen had a better day against Norway than he did against France, finding his receivers, throwing for 155 yards. Barrow ran well both between the tackles and popping outside and was spelled nicely by young Unal.

The Finnish defense, led by Edward Vesterinen, who has been superb throughout the tournament, are big and physical and will give the smaller Spanish offensive line major issues. This is where the game will be won or lost and where Finland will likely have the advantage.