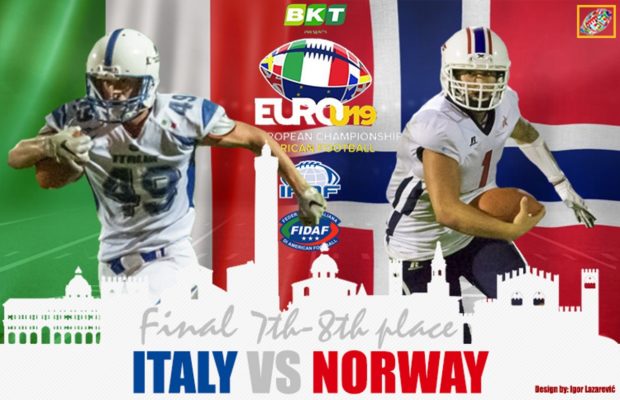 Team Italy will try to finish off the IFAF 2019 U19 European Championships in Bologna, Italywith a win in front of their home crowd when face Norway in the game for 7th place Sunday, August 4 at C.S. Bernardi Stadium.

This is a game between two teams desperately looking for their first win of the tournament. The Italians played well against Denmark in a 17-6 loss in their opening game, surprising many observers. However, they were themselves surprised by a feisty Spanish team who beat them 36-21.

Norway looked good at times in their opening game against Team Sweden but finally lost 20-7.  However, they were blanked 29-0 by Team Finland and struggled the entire game just to make first downs.

Italy’s QB Davide Rossi is among the leading passers so far and with targets like the tournament’s third leading receiver Adalberto Rinaldi (144 yards) and Alessandro Brovelli  they should be able challenge the Norwegian secondary.  However Italy’s lack of a ground game hurts them. In the loss to Spain, Italy’s running backs generated -14 yards rushing. And they have given up 410 yards rushing in two games. Defensively, Rahmi El Mechri leads the team in tackles with Ariel Nataleright behind him. Italy has a chance in this game if they can find the form they had against Denmark who they held to 74 yards passing.

Norway’s starting quarterback, Raymond Myhrer, who was bothered by an injury to his throwing arm, switched to receiver in the second half against Finland, has fully recovered and will start this game.  That will make a big difference to an offense that produced a mere 40 yards against Finland. It was Myhrer’s leadership that kept Norway in the game against Sweden. However, the Norwegian offense has had trouble the entire tournament and has produced a total of 159 yards of offense in two games. They have -72 yards rushing. Running back Jonas Nordberg along with André Hafstad Busch and Benjamin Sweetlove will have to step up in this game. Myhrer and backup quarterback Oskar Bakkeli need to find Erlind Lien who had 99 yards receiving against Sweden and then barely saw the ball in the game against Finland.

On defense,  defensive end Kacper Latkowski has stood out along with linebacker Elias Aune.They will also need to step up.

This game is hard to predict.