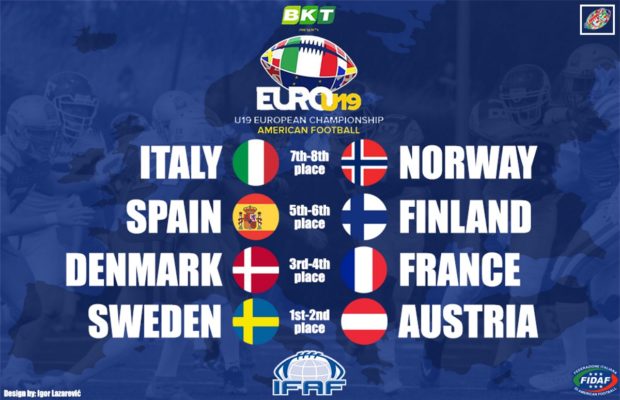 The IFAF 2019 U19 European Championships head into the the medal round games as well as the games for 5th and 7th on Sunday, August 4 at both stadiums, Arcoveggio Stadium and C.S. Bernardi Stadium. In the two late games, Sweden and Austria will battle it out for the gold medal while France and Denmark play for the bronze. The earlier games will feature Spain and Finlandsquaring off for 5th place and finally Norway and the host team, Team Italy in a battle for 7th,

Team Austria has had no trouble in arriving at the gold medal final with easy wins over Spain, 61-7, and Denmark, 45-6. Sweden had a tougher road with a 20-7 victory over Norway and then a physical battle with France which ended in a 7-0 win for the Swedes. Sweden’s spread offense sputtered for much of the game against France, coming alive early in the second half with quarterback Viktor Ekberg taking charge, marching his team downfield mixing up his plays and finishing it off by barging into the end zone himself. With the way Sweden’s defense was playing, neutralizing the French run game, it was enough.

Swedish DE Sebastian Nilsson and the rest of the defense were around the ball constantly. However, against an Austrian team with multiple weapons and the most well balanced offense in the tournament, that won’t be enough. Wide receiver Victor Wikstrom needs to get the ball in his hands and running back Victor Cimrell needs the offensive line to create some gaps. Austrianquarterback Yannik Gruner has several receivers and running backs at his disposal. Running backs like Lukas Halswanter and Johannes Schutz, and a receiving corps led by receiving leader Noah Toure and teammate Mathias Berghammer,

Team France’s wing-t offense will face a new test Sunday in the bronze medal game against a Team Denmark which has yet to match its potential. France, led by quarterback Matheo Collomb,who knows how to run the offense, will pound the Danish front seven. The French have four different backs who carry the load – Keita Redval, Laib Cyril, Bakhanti-Polin Yans and El Kharti Elias. Redval is fourth in rushing so far but they all carry an equal load.

The French defensive line is athletic and physical so Danish running backs David Mac Espersen, August Lillie and Magnus Nørgaard will be in tough. Denmark’s quarterbacks have been under tremendous pressure. Christoffer Bay Carstens and Alexander Schwartz will need to shake off the nerves, and find their receivers.

Team Finland, who looked impressive in blanking Norway 29-0, will be facing a Spanish squad who surprised everyone by unleashing their offense against Team Italy. Running back Miguel Quince had an outstanding day rushing for 80 yards to take over the rushing lead for the tournament. However, his counterpart for Finland, Nico Barrow was also superb scoring two touchdowns against the Norwegians while rushing for 95 yards. Finnish starting quarterback Jesper Korkalainen had a better day against Norway finding his receivers, throwing for 155 yards.

Spanish quarterback David De Diego threw for 232 yards against Italy with Matias Castagnocatching four passes for 109 yards. Needless to say, the Finnish secondary will have their eyes on Castagno. The Spanish front seven will have to keep Barrow bottled up as much as possible. He ran well both between the tackles and popping outside and was spelled nicely by young Deniz Unal.

Two teams desperately looking for their first win of the tournament will face each other when Italyand Norway clash. The Italians played well against Denmark in a 17-6 loss in their opening game, surprising many observers. However, they were themselves surprised by a feisty Spanish team who beat them 36-21. Italy’s QB Davide Rossi is among the leading passers so far and with targets like the tournament’s third leading receiver Adalberto Rinaldi (144 yards) and Alessandro Brovelli  they should be able challenge the Norwegian secondary.

Norway’s starting quarterback, Raymond Myhrer, who  went to receiver in the second half against Finland, has fully recovered from the arm injury and will start this game.  That will make a big difference to an offense that produced a mere 40 yards against Finland.