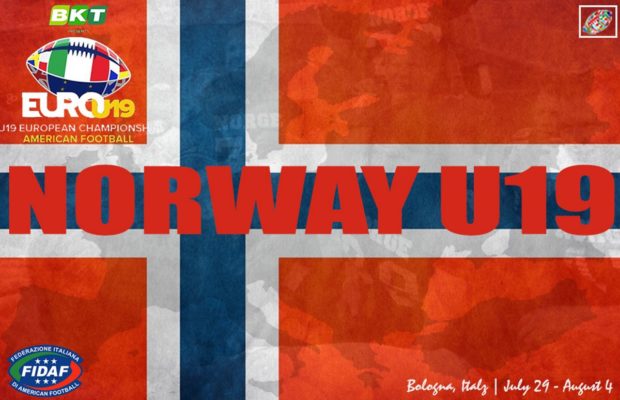 Team Norway has announced a 38 man roster as the team makes final preparations to leave for the IFAF 2019 U19 European Championships being held in Bologna, Italy from July 29 to August 4.

Head coach Jørgen Benestad-Johansen led his team to the bronze medal in last year’s Nordic Championships, a major accomplishment after being away from international competition for almost a decade.

This year, Norway defeated Great Britain to qualify for the European championships and will face Sweden in the first round of action on July 29, a Swedish team that beat them in the Nordictournament.

The Vålerenga Trolls have the most representation on the team with six players, They are followed by the Eidsvoll 1814s, Sand Falcons, Oslo Vikings and Kristiansand Gladiators with four each. The Lillestrøm Starfighters and Åsane Seahawks have three apiece while the Kongsvinger Fortress, Drammen Warriors, Tønsberg Raiders and Nidaros Domers have two each. Represented by one player are the Lura Bulls and Kolbotn Hunters.