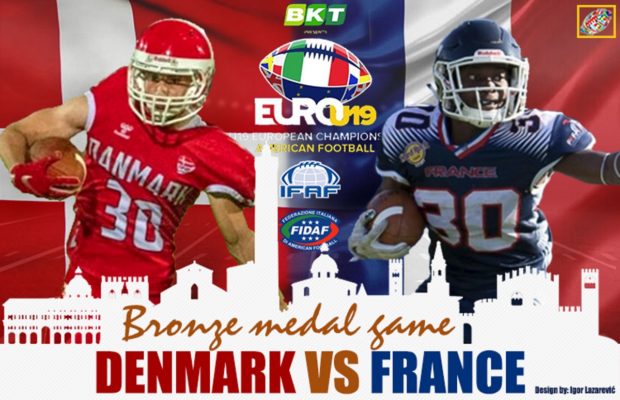 The bronze medal game in the IFAF 2019 U19 European Championships features Team Denmark and Team France who play the early afternoon game at Arcoveggio Stadium in Bologna, Italy.

Team Denmark opened the tournament with a 17-6 victory over the Italian national team but then were beaten by Austria 45-6. France looked impressive in blanking Team Finland 30-0 in their opening game but were themselves shut out against Sweden, 7-0.

Team France’s wing-t offense can cause problems for opposing front sevens and against Finland it was very effective, especially in the second half. The Swedes kept the French running backs in check in their semifinal game against France but will the Danes have the same success? Led by quarterback Matheo Collomb,who knows how to run the offense, France will definitely try to impose its will on the Danish front seven. The French have four different backs who carry the load – Keita Redval, Laib Cyril, Bakhanti-Polin Yans and El Kharti Elias. Redval is fourth in rushing so far but they all get equal playing time more or less.

On defense, defensive back Clement Chevalier has been superb for France. He leads the team in tackles and leads the tournament in interceptions with three. Defensive tackle Fontenard Christopher anchors a big and athletic defensive front seven. He scored a touchdown against Finland after deflecting a pass into his own hands.

The Danish running backs David Mac Espersen, August Lillie and Magnus Nørgaard will be in tough against a fast and physical French front seven. They will need their quarterbacks, Christoffer Bay Carstens and Alexander Schwartz, who have been under tremendous pressure to shake off the nerves, and find their receivers.  Those receivers – Julius Bunk, Victor Lovenholt, Andreas Paaske and Magnus Buus Madsen – will be facing a very athletic secondary and will need to find ways to get separation.

Defensively, linebackers David Tawake and William Kidmose who lead the team in tackles anchor a solid front seven but will really be put under pressure again. Against this French offense, the linebackers really need to be able to see so keeping blocks off of them will be even more important today.

This game will be played in 30 degree (86 F) heat which could have an effect on the Danishdefense, as it did for the Finns in the second half of their game against France.