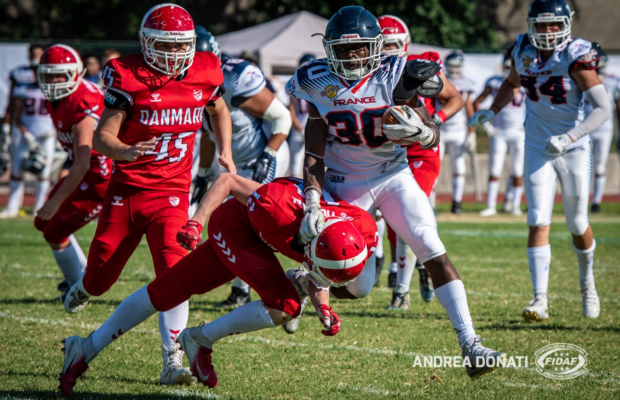 It took Team France a half to get rolling they definitely did in beating Denmark 42-15 to win the bronze medal in the IFAF 2019 U19 European Championships Sunday evening in Bolgona, Italy.

France took a 14-7 halftime lead with Denmark playing solid football. The second half was a different story.

The French scored four straight touchdowns including a spectacular 84 kickoff return touchdown byJonas Pernier to lead off the second half to jump out to a 42-7 lead before Denmark found the end zone again with three seconds remaining.

France racked up 337 yards rushing with four different ball carriers. Keita Redval rushed four times for 142 yards (!) while Bakhanti-Polin Yans had 13 carries for 136, Audren Cliquot had 24 and Florian Monduc had 23 and two touchdowns.

For Denmark, the offense came alive in this game with quarterback Alexander Schwartz playing solid football, finding his receivers. He threw for 157 yards and a touchdown on 17 of 27 passing. The Danish running backs ran for 118 yards with August Lillie the top rusher for the Danes with 39 yards. Wide receiver Andreas Paaske caught eight passes for 74 yards, Julius Bunk had seven for 81 while Jonathan Steinhauer caught four for 40 and a touchdown and Victor Manzantihad three for 48 and a touchdown. Denmark opened the scoring in the second quarter as Schwartz marched them on a 13 play, 77 yard drive eating up the first five minutes of the quarter capping it with a 22 yard touchdown pas toJonathan Steinhauer to take a 7-0 lead.

That lead did not last long as Polin found a seam on the next French possession burst through and raced 47 yards to tie  the game at 7-7.

Denmark’s offense stalled and France took over on their own 42 yard line, Eight plays later Monduc barged into the end zone from the one yard line to give France a 14-7 lead with less than two minutes to go

Denmark ran into penalty problems and wound up the first half stranded on their own 29 yard line.

The next shock came on the opening kickoff of the second half as Pernier  simply outran the entire Danish team taking the ball 84 yards to increase the lead to 21-7.

The flood gates opened up. The Danes stalled again and France took over on their own 38. With four different backs running the ball they marched down to the one yard line and Monduc punched it in to extend the lead to 28-7.

Redval needed one play on the next French possession finding a seam and taking off for an 85 yard touchdown boosting the lead to 35-7 early in the fourth.

Two series later Denmark mounted a nine play drive but Clement picked off a pass and returned it 90 yards for France’s final touchdown of the night. Denmark finally took over the ball at their own 44 yard line with two minutes left. Carstens took his team down to the 26 and hit Mazanti for a score. Schwartz hit Paaske for the two point conversion with no time left.

With the win, France wins the bronze medal for the second time in European Junior Champi0nship history,