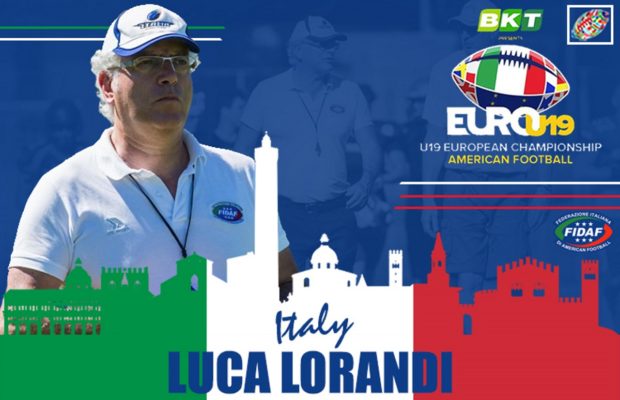 Italy’s U19 National Team, Team Italy, under head coach Luca Lorandi, wound up its final training camp last weekend and get set to face the rest of Europe at the  IFAF 2019 U19 European Championships being held in Bologna, Italy from July 29 to August 4.

Lorandi, a 31 year coaching veteran, has high hopes as he prepares his team to take on Denmarkin the opening game of the tournament. American Football International asked Coach Lorandi, about being the host nation and the pressures that brings, the mood of the team, the heat and a key player to watch out for on the Italian squad.

American Football International: Tell us briefly about your background in coaching in Italy.

Lorandi: I’ve been pioneering the early 80’s football thru the incredible boom of the 90s as a player and a coach of the Rhinos Milano. I started my coaching career at 26, almost 31 years ago, in the youth football championship. I developed thru all levels up to be the head coach of several senior teams like the Rhinos Milano, Lions Bergamo and Giaguari Torino. Additional experience as offensive and defensive coordinator at the Seamen Milano are part of my sport career. I had the chance to coach at Villanova University (NCAA 1-AA) in my early coaching days. I’ve been Italian champion at Division 1, Division 2 and Youth level several times.

AFI: You are entering the tournament as the host nation. How much added pressure does that bring?

Lorandi: We obviously face high expectations as hosting nation but we also got an extraordinary effort from the Italian federation, FIDAF, both from financial and organizational point of view. The logistic machine provided to my team is not comparable to any other previous mission. Definitively, this is a unique experience for all of us.

AFI: How was the mood at your final training camp?

Lorandi: We live a great moment of sport and life. Kids are focused and motivated and the coaching staff is hardy working to fill the gaps of the technical and physical preparation. Players and coaches are facing this unique opportunity acting as much as professional they can.

AFI: You are the #6 seed and will be facing Denmark a team that finished third four years ago and has played in many European Championships. How much do you know about them and will you adjust your playing style?

Lorand: This is the first time Europe gets a real chance to have all the big players in the tournament with the exception of Germany. Denmark is a tough team with solid history and long tradition in youth football programs mostly based on a long time dedicated coaching staff. The football model has been well tested in the recent Nordic games. Italy still belongs to the traditional old style of short life cycle team. We built the team in the last 6 months and we don’t have a stable national football program like France as a backbone of the organization. Nevertheless, we will present a highly talented group of skilled young players with a very specific playing style.

AFI: Who are your key players?

Lorandi: Among all other I will say our quarterback Davide Rossi. His progress has been incredible and the recent sport year took him to lead his team, Parma Panthers, during hard times in the 1st Division championship. We trust him and his leadership.

AFI: Temperatures will be in the low to mid 30s. Will the heat be a factor?

Lorandi: The high temperature period have been a factor during all the preparation week. We had to keep it in our mind every single practice. In the game heat will be a factor especially playing in the afternoon. We are focus to keep our players continuously checked and safe.