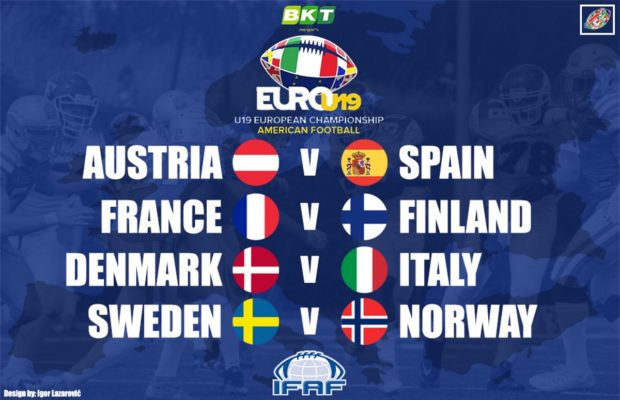 The IFAF 2019 U19 European Championships being held in Bologna, Italy kick off Monday, July 29 with the four quarterfinals scheduled.

The host team Italy, is joined by the top three ranked teams based on the results of the previous European U19 Championships, Sweden, Denmark and Austria, who all automatically qualified for the tournament. The remaining four, Finland, France, Spain and Norway went through qualifying games.

Finnish head coach Tero Virtanen coached Finland to the silver medal in the 2018 Nordicchampionships. The Finnish national team won the first three U19 European Championships, 1992, 1994 and 1996, finished third in 1998 and took fourth in 2000.

In other words, both teams have excellent records in previous European championships. This game is a toss up.

Team Austria enters the tournament as one of the favorites. The Austrians have not lost a game to a European team since 2008. Since then, Team Austria has won three straight titles. Coach Roman Floredo has again a formidable squad and will be difficult to beat.

Spain, who backed into the tournament after replacing the Netherlands who pulled out.will be in tough. Spain has never won a game in the main tournament. The last time Spain reached the final tournament was 2011 when they were eliminated by Swedenin the opening game. Team Spain head coach Marcos Guirles is looking forward to the challenge.

Team Sweden head coach Sebastian Brinkenfeldt has taken over a team which won the 2018 Nordic U19 Championships, beating Finland in the gold medal final. Team Sweden also went to the bronze medal game in the 2018 IFAF U19 World Championships but were beaten by Team USA.

Head coach Jørgen Benestad-Johansen of Team Norway led his team to the bronze medal in last year’s Nordic Championships, a major accomplishment after being away from international competition for almost a decade. However, the Norwegians lost to Sweden in the Nordic tournament.

Nevertheless, Norway decisively defeated Great Britain to qualify for the Europeanchampionships and could surprise.

Team Denmark finished fourth in the 2018 Nordic championships after being beaten by Norway.But that was without head coach Lars Carlsen who was forced to miss the tournament to undergo cancer treatment. This could be a different Danish national team. Carlsen led Denmark to third place in 2015 and has constantly taken his teams deep into tournaments.

For Team Italy, this is a major step forward and according to head coach Luca Lorandi, because Italy is the host country, the support the team is getting has been without comparison.  Expect Italy, competing in the quarterfinals for the first time, to be well prepared.