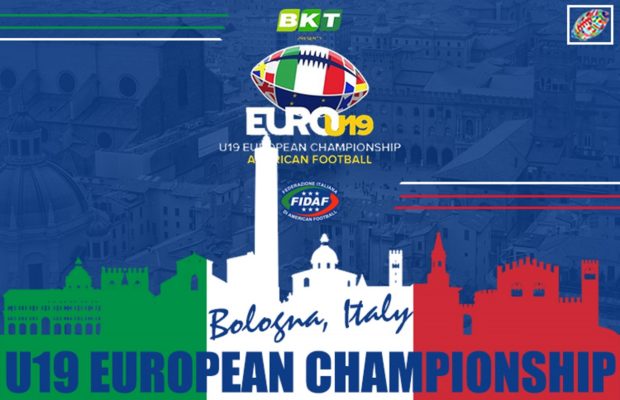 The northern Italian city of Bologna is acting as host to the IFAF 2019 U19 European Championships from July 29 to August 4 which will see eight of the top nations in Europe battle for the U19 title.

Teams from Sweden, Austria, Denmark, France, Finland, Spain, Norway and Italy will battle it out over the course of the seven days, each playing three games.

This is the first time the U19 European Championships have been held in Italy.

Bologna is the ancient capital city of the Emilia-Romagna Region in Northern Italy, and strategically placed to provide links to Europe’s motorways, railways and airports. It is the seventh most populous city in Italy, at the heart of a metropolitan area of about one million people.

A city of art and culture, Bologna is home to the oldest university in the western world which still welcomes thousands of students every year from all over the globe. With its medieval buildings and warren of porticoed streets (see below), Bolognais a unique wonder of the world that offers visitors a surprising wealth of works of art as well as countless places of immense natural beauty. A fifteen-minute bus ride from the city center, Guglielmo Marconi International Airport connects Bologna to the main Italian and European airports and as one of Italy’s major hubs links the  inks the country to many international destinations.

No other city in the world has as many arcades, or porticos, as Bologna, in fact they are more than 38 km long counting only those in the center of town. They are culturally important for the city and are a candidate for World Heritage Site for UNESCO. They also hold a very practical advantage: you never need an umbrella in Bologna, because walking under them will assure that you will never get wet. The games of the IFAF 2019 U19 European Championships will be played at two stadiums, C.S. Bernardi Stadium and Arcoveggio Stadium.

The two venues are only a few minutes apart and close to major hotels and easy to reach. They each have a capacity of up to 1,200 under cover and between 2,300 to 2,700 in total. Both have natural grass fields