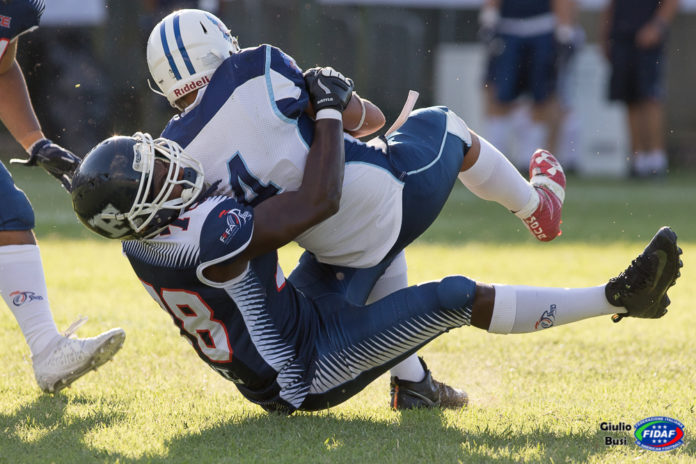 Team France broke open a 0-0 halftime tie scoring 30 unanswered points to defeat Finland 30-0 in the opening game of the IFAF 2019 U19 European Championships.

The French ground game simply wore down the Finnish defense which spent far too much time on the field.

The game opened poorly from both teams with mistakes and penalties the order of the day for the first half.

The Finnish quarterbacks struggled finding their receivers and when they did the passes were dropped. Jere Bynam started but gave way to Ambro Urjansson in the second half who provided a little spark but not enough. The French offense which had trouble getting finding a rhythm in the first half finally began to pound out the yards in the second half.

Chevalier Clement, who was named Game MVP for France, scored a touchdown on a 57 yard interception return while kicking a field goal and three extra points. Manigold Terence scored on a 12 yard touchdown reception from quarterback Collomb Matheo while Fontenard Christopherdeflected a pass into his own hands in the end zone for another touchdown, Running back Keita Redval broke the game open early in the second half with a 60 yard run which set up the field goal by Clement. He then scored the final touchdown on a nine yard scamper. He finished as the leading rusher with 93 yards rushing.

The French offensive line took a while to find their timing but as the Finnish defense started wearing down in the second half the blocks began working. Running back Cambron Louis was  workhorse for France with xx yards rushing. France rushed for a total of 248 yards, 171 of them in the second half.

Neither team could move the ball with any consistency in the first half and first downs are few and far between.

But France mounted its first solid drive to open the second half finishing with a field goal. A blocked punt on the next Finnish series gave France the ball on the Finnish 31 yard line. Seven plays later, aided by a penalty on a field goal, Terrence hauled in a 12 yard touchdown pass to extend the lead to 10-0.

Clement picked off a pass and returned it 57 yards on Finland’s next possession and suddenly the score was 16-0 late in the third.

Finland’s offense sputtered and France took over on the Finnish 33 to start the fourth. Although the French drive ended by punting the ball down to the Finnish one yard line, Fontenard put a dagger into the hearts of Finnish fans on the next play, deflecting a pass in the end zone and catching it. With the score 23-0, Finland looked weary.

Urjansson tried to spark his offense but nothing was working. France mounted a 77 yard drive capping it with Redval touchdown.

France now moves on to the semifinals on Thursday, August 1 when they will face the winner of the game between Sweden and Norway. Finland will now play the loser of that game.