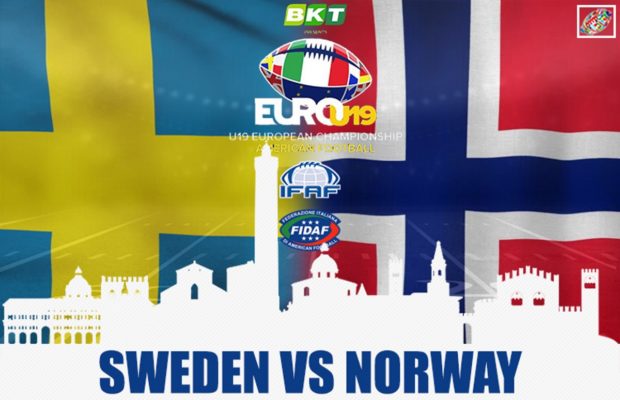 Team Sweden faces Team Norway in one of the two late games at C.S. Bernardi Stadium as theIFAF 2019 U19 European Championships continue in Bologna, Italy.

Team Sweden has won two silver medals in this tournament in 1996 and 2008 and captured bronze once, in 2006. This is Norway’s first ever trip to the finals of the European Junior Championship.

Team Sweden head coach Sebastian Brinkenfeldt has taken over a team which won the 2018 Nordic U19 Championships, beating Finland in the gold medal final. Team Sweden also went to the bronze medal game in the 2018 IFAF U19 World Championships but were beaten by Team USA.

Head coach Jørgen Benestad-Johansen of Team Norway led his team to the bronze medal in last year’s Nordic Championships, a major accomplishment after being away from international competition for almost a decade. However, the Norwegians lost to Sweden in the Nordic tournament.

Nevertheless, Norway decisively defeated Great Britain to qualify for the European championships and could surprise

Coach Brinkenfeldt will likely start Viktor Ekberg at quarterback , backed up by Ture Nilsson.Running back Victor Cimrell will no doubt start but both Anton Stensson and Daniel Alarikssonmay see action.. Victor Wikstrom and Knut Wachmeister (Julian Edelman type) will no doubt be big targets for Ekberg.

On defense, Sweden’s linebackers led by Alexander Nordgren are a talented group. Sebastian Nilsson MVP of the Swedish Superserien anchors a strong defensive line while Noah Alstengives the team a solid secondary.

Team Norway quarterback Raymond Myhrer has moved from wide receiver which he played in the 2018 Nordic championships and has proven to be a talented leader on the offense. In the backfield he will be joined by running back Jonas Nordberg, who is new to the team this year. He has impressed at camp and is big, strong and quick and can also catch the ball well. Wide receiversAdrian Gobel and Franz Åsheim will be two of Myhrer’s main targets tonight.

On defense, Norway will look to Kacper Latkowski to perform well. Defensive end Lars Martin Nilsen, who can also step in at tight end, is always dangerous. Ola Gaarden along with Jonathan Olsen anchors a solid defensive secondary. Linebacker Markus Sætereng bolsters a front seven that could pose problems for Sweden.

While Sweden defeated Team Norway fairly comfortably in the Nordic tournament last year, this will be a different Norwegian team, with a little more confidence.