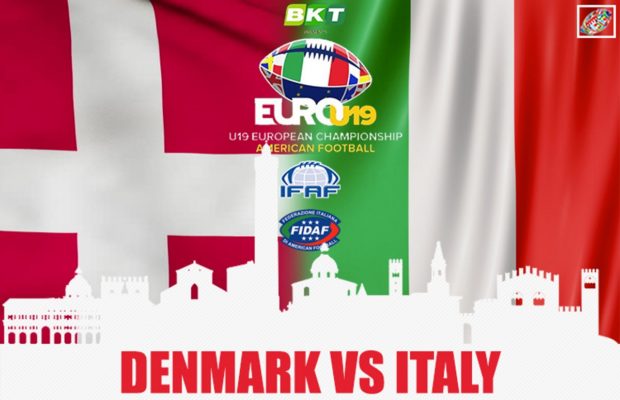 Team Denmark will take on the host team, Italy in the final game of the day in the IFAF 2019 U19 European Championships at Arcoveggio Stadium in Bologna, Italy.

This will be the first ever meeting between these two teams.

Team Denmark finished fourth in the 2018 Nordic championships after being beaten by Norway.But that was without head coach Lars Carlsen who was forced to miss the tournament to undergo cancer treatment. This could be a different Danish national team. Carlsen led Denmark to third place in 2015 and has constantly taken his teams deep into tournaments.

For Team Italy, this is a major step forward and according to head coach Luca Lorandi, because Italy is the host country, the support the team is getting has been without comparison.  Expect Italy, competing in the quarterfinals for the first time, to be well prepared.

Coach Carlsen is an old hand at preparing for championships tournaments. He will startChristoffer Bay Carstens at quarterback with David MacEspersen at running back.. Team captain Julius Bunk will start at one wide receiver spot while Victor Lovenholt and Magnus Buus Madsen are the other two.

The offensive line struggled with injuries in the Nordic tournament last year and has returned this year healthy. Defensively, linebackers David Tawake and William Kidmose anchor an excellent front seven. Lukas Bjerg Hansen gets the nod at safety.

For Italy, Coach Lorandi has an easy choice at quarterback as young Davide Rossi led his Parma Panthers team to the playoffs this season in Italy’s Div. 1. His favorite targets today will likely beAndrea Costanzi at slot and wide receiver Adalberto Rinaldi. Andrea Allegretti will line up in the backfield at running back.

This will be a game between a team with years of experience in high level tournaments and a host team determined to impress in front of their home fans.