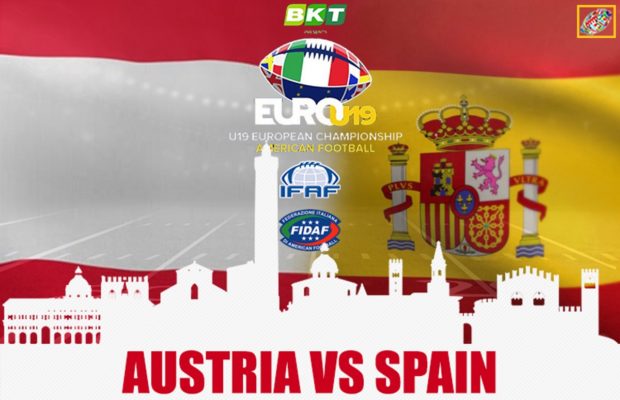 Team Austria and Team Spain square off in one of the two opening games of the IFAF 2019 U19 European Championships at Bologna’s Arcoveggio Stadium.

Team Austria enters the tournament as one of the favorites. The Austrians have not lost a game to a European team since 2008. Since then, Team Austria has won three straight titles. Coach Roman Floredo has again a formidable squad and will be difficult to beat.

Spain, who backed into the tournament after replacing the Netherlands who pulled out.will be in tough. Spain has never won a game in the main tournament. The last time Spain reached the final tournament was 2011 when they were eliminated by Sweden in the opening game. Team Spain head coach Marcos Guirles is looking forward to the challenge though

Coach Floredo has two excellent quarterbacks in Yannik Gruner and Nico Hrouda both from the Vienna Vikings. Gruner will be attending Concordia University Wisconsin (NAIA) this fall. The choice of starter will be a game time decision. Wide receivers Matthias Berghammer and Johannes Schütz both play in the Austrian Football League. Berghammer was the second leading receiver for the Traun Steelsharks with 621 yards receiving. Schütz had 301 yards receiving for the Graz Giants. In other words they are two high quality receivers.

On defense, Austria relies on defensive back Cserveny Benjamin (SonicWall Rangers Mödling)to lead one of the best secondaries in the tournament.

Coach Guirles has been forced to scramble and cobble together a Spanish team that had been eliminated and was only called back in at the last minute. Roughly half the squad that played against Holland did not return for this tournament due to other committments. Quarterback David De Diego (LG OLED Las Rozas Black Demons, Spain’s top league) is a natural born leader for this u19 squad. WR Alonso Fernández is solid with a good combination of size, speed and catching ability. The offense also features speedy Matías Castagno at receiver as well as versatileJordi Rua.

Defensive end Alejandro Fernández is one of the best defensive players in Spain and  behind him is Paul Morilla who plays with a high motor. Defensive back Lucas Masero has a reputation as a playmaker.

Spain will be hard pressed in this game. Expect Austria to dominate.