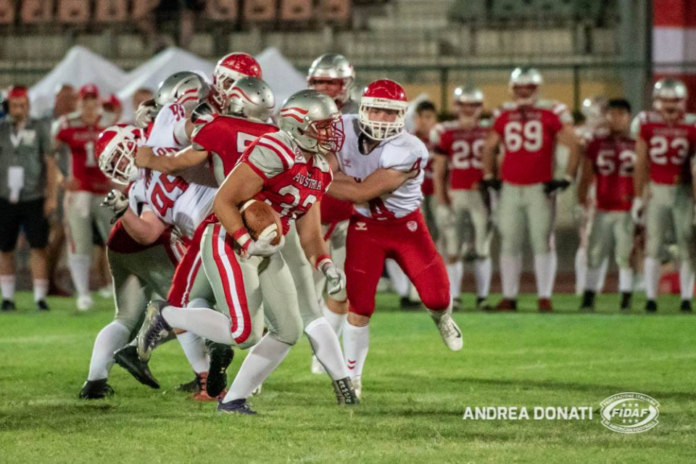 Team Austria simply had too much firepower and downed the Danish national team 45-6 Thursday at Arcoveggio Stadium in Bologna, Italy in the semifinal round of the IFAF 2019 U19 European Championships.

The Austrians simply imposed their will on Team Denmark from the opening whistle and never let up.

Team Austria quarterback Yannik Gruner was masterful throwing for 175 yards and two touchdowns while running for 33 yards and another touchdown. Wide receiver Noah Toure was impossible for the Danish secondary to cover at times grabbing five receptions for 150 yards and a touchdown while running back Johannes Schutz had 30 yards receiving and another touchdown. Nico Hrouda led all rushers with 42 yards rushing and one touchdown while Schutz had five carries for 31 yards and a major. Lukas Halswanter, Austria’s leading rusher against Spain, had five carries for 26 yards and a touchdown. Wenzel Rock kicked six extra points and a field goal.

Gruner engineered the first touchdown for Austria on the opening drive of the game, marching his team on a 14 play, 65 yard drive, mixing up the plays nicely capping it with a 15 yard touchdown pass to Schutz for a 7-0 Austrian lead. 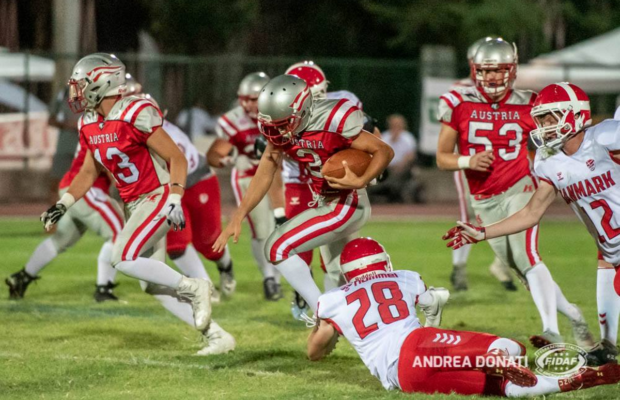 Neither offense was able to sustain drives until Austria struck again early in the second period as Gruner connected with Toure on a 25 yard touchdown pass making the score 14-0 with almost 10 minutes to go in the first half.

With just under six minutes to go in the half, Denmark finally got on the scoreboard as Lilliefinished off a nice 45 yard drive, barging into the end zone from the one, narrowing the gap to 14-6.

The Austrians had now found their rhythm however and scored on their next two possessions with Gruner and Schutz both finding the end zone.

Austria went into the break leading 28-6 and in firm control.

Denmark opened the third quarter in the same way they finished the second, unable to sustain a drive while the Austrians struck for another touchdown with Halswanter scoring on a six yard run. Toure had set up the touchdown with a 39 yard reception.

With the score 35-6, Denmark made a quarterback change with Carstens coming in for Schwartz.It did not help as the Danes could not advance past their own 32 yard line.

Austria also switched quarterbacks with Hrouda replacing Gruner and also with the same result; an Austrian touchdown as Hrouda finished off a 69 yard drive with a nine yard touchdown scamper boosting the score to 42-6 late in the third.

Denmark was finally able to slow the Austrian onslaught early in the fourth quarter, forcing them to kick a field goal instead of scoring a touchdown, increasing the lead to 45-6.

However, that was about it. The Danes were not able to get closer than Austria’s 41 yard line after that and the game ended 45-6

With the win, Austria advances to the gold medal final on Sunday, August 4 where they will face Team Sweden who defeated France 7-0. Denmark will take on France to decide the bronze medal winner.