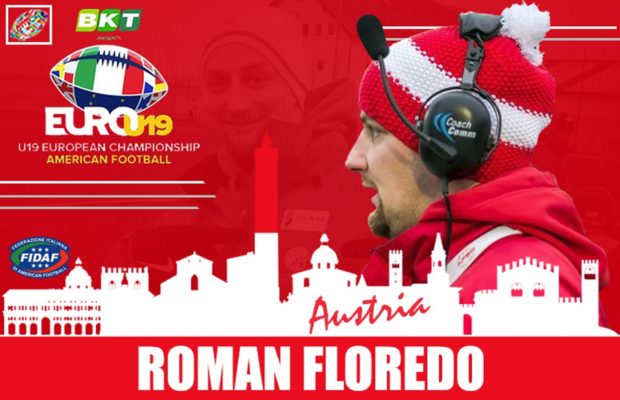 As the IFAF 2019 U19 European Championships approach in Bologna, Italy, July 29 – August 4, Team Austria head coach Roman Floredo put his team through its final paces this past weekend holding the last training camp before departing for Italy.

The Austrian national team has not lost a game to a European team since 2008 when Austriaearned fifth place in the tournament. Since then, Team Austria has won four straight titles. Coach Floredo has been a part of that development since 2008 and took over as head coach in 2016.

As he makes final preparations,  Coach Floredo took a few moments to answer a few questions about his coaching background and prospects for the tournament.

American Football International: Tell us briefly about your background in coaching in Austria.

Floredo: I started to coach the U19 team with the Vienna Vikings in 2005. In 2009 after my retirement as a player, I moved up to coach Team 2. After 2 seasons I made another step up and took offer the LB in the 1st 2015 I was the defensive coordinator for the Vikings. My first tournament with the national team was in 2008 in Sevilla, Spain. In 2010 I took offer to run the defense for the U19s. In 2013 and 2014 I also was the defensive coordinator for the Men’s Team. I took over as head coach of the U19 national team in 2016.

AFI: You are facing your second major tournament as head coach of Austria’s national team. You won a version of the IFAF U19 European title in 2017. How does it feel entering this tournament?

Foredo: it feels like every time it´s a special thing and a honor to coach that Team!

AFI: You had your final training camp?

Foredo: Yes, we finished the last camp this past Sunday and are preparing to leave for Italy now.

AFI: You enter the tournament as the #2 seed. Does that bring any extra pressure?

Floredo: The Austrian National team is undefeated since 2011 in Europe, so the pressure for the players and the coaches is very high and anything other than participation in the final would be a big disappointment for the organization, players and coaches!

AFI: You face Spain in the first round, a team that backed their way in with the Netherlands pulling out. How will you keep your players from being too confident?

Floredo: I think we all know this is a playoff game. And we will treat it as such. If you lose you are out for the title!

AFI: Austria has had good success in the U19 European championships over the years, especially in recent years. Do you feel added pressure?

Floredo: As I mentioned earlier, Team Austria hasn’t lost a game since 2008. This means the pressure is on all the time. You can feel the pressure at every practice or meeting.